“African Futures” aims to explore the continent’s critical engagements with the past, present, and future of Africa’s global entanglements. The continent has been characterized as a laboratory of the future, as the last frontier of capitalism, with living realities based on concepts and practices of multiplicity, circulation, and flexibility. While the West appears to be self-provincializing, Africa is expanding. Africa is on the move – it always has been.

Grand narratives about Africa have always been characterized by controversial visions of its future. The current optimistic outlook that celebrates “Africa rising,” and the emergence of new African middle-classes, is countered by warnings of a new scramble for Africa. Local modernist visions are presented as expressions of renewed African self-confidence, but also denounced as utopian dreamscapes that tend to ignore complex contemporary realities. Increasingly, the continent is perceived as an experimental field for global tomorrows.

Future-making projects impact contemporary Africa’s ecologies, economies, and societies, capturing the imaginations across multiple social positionalities. A key conceptual question in need of empirically grounded answers is: What constitutes the future? While Africa is intimately bound up with central narratives about the future, critical new questions have arisen about whose future is being referred to and how these visions are to be put into practice.

The conference theme thus invites reflections on the role of contingency in the world, including current and past notions of imagination, emergence, projection, vision, and speculation. The topic bears a paradox: The future is ambiguous because it is uncertain, unknown, and open; but the future is not completely contingent, as it emerges out of specific pathways, past and present. While some futures appear to be more likely than others, alternative futures compete to shape the present. Elaborate visions of time - past, present and future - may occur in art or politics, or embodied in the minutiae of everyday life.

Questions about how futures are made, imagined, and negotiated variously refers to materialities, discourses, and social practices that link the present to both past and future. What the future should look like is subject to fierce negotiation and contestation, within academia and beyond. Whereas the hard sciences primarily study how a “future of probabilities” is anticipated through different forms of calculation, measurement, and modelling, the humanities and social sciences also take into account how a “future of possibilities” takes shape through visions and imaginaries. These futures are produced through an interplay of numerous actors, interests, and institutional settings across manifold scales.

The last two years have been characterized by the Covid-19 pandemic and more recently the Ukraine War is already showing its global effects. Whereas the catastrophic consequences of the pandemic experts forecasted for the African continent fortunately failed to materialise, the effects of the war on the European continent are feared to be disastrous at least for parts of Africa. On a global scale the entanglements mentioned above become obvious in a very impressive and serious way and illustrate how flexible ideas for the future must be.

“African Futures” invites contributions from a broad range of disciplines that conceptualize the future in various ways, resembling the ambiguity of the future itself. Contributions explore practices and processes, discourses and imaginings, policies and speculations about future-making in and about Africa, by Africans and others beyond, working across different time frames and spatial dimensions. Contributions may explore expressions of agency as well as consequences of structural forces shaping future trajectories, aspirations, visions, and dreams in historical and contemporary perspective. 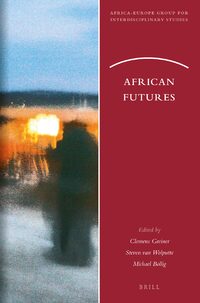 Open Access online publication: "African Futures"
The project started as part of the preparations for the ninth European Conference on African Studies (ECAS), jointly organized by the University of Cologne’s Global South Studies Center (GSSC) and the Catholic University of Leuven’s Institute for Anthropological Research in Africa (IARA), and due to be held in Cologne in June 2021 but the pandemic development to a postponement to Whitsun week 2023 (31 May . 3 June 2023). See the Brill website.